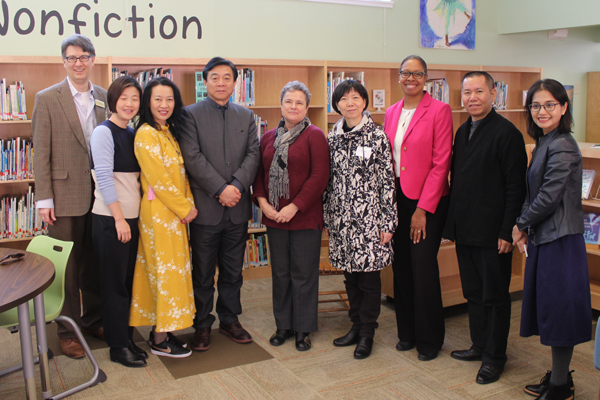 Recently, visitors from the Yung Wing School in Zhuhai, China visited CFS to formalize a partnership exploring educational exchange between our two schools. Among the possibilities of the partnership are study tours, curriculum exchange, and other professional development for educators, as well as cultural exchange.

Founded in 2003 Yung Wing School Zhuhai is a prominent private school invested and built by Zhuhai Huafa Group Co. It is named after Mr. Yung Wing, the father of Study-abroad Chinese Students. Now it comprises a primary school, a middle school, and an international high school. The school covers a total area of more than 90,000 square meters, construction area of more than 80,000 square meters, a total investment of more than 400 million RMB and it has more than 2,500 students and 500 teachers and staff members.

Adhering to the spirit of tolerance, the school promotes the educational philosophy of "making a child a future" and the concept of "green education", rooting in traditional culture and absorbing the essence of Western education as well as taking development education, inheriting culture, and educating society as its mission. It also cultivates the social elites with the concept of harmony, living, tolerance and elegance, and it is committed to creating brand schools with traditional cultural characteristics and international education characteristics. After nearly two decades of development, the school has rapidly developed into an educational icon in China. In 2007, it was rated as a provincial elite school and at the same time, it won the title and honor of the National Youth Small Reporter Training Base, the Chinese Culture Heritage Base, and the Guangdong Youth Science and Technology Education School.

Austin Campion '02 and Eric Love '05 are excited to support a robust crew in the a production of A Christmas Carol this December.

As part of our ongoing response to the public health threat posed by the coronavirus and COVID-19, we have made the difficult decision to cancel the events associated with "Celebrating Dance and Each Other." We are tentatively planning to reschedule the weekend's events in October. Stay tuned!

Read more about Celebrating Dance and Each Other! (Postponed)

Our physical campus is closed to all but essential personnel and service providers, but we are engaging our Early through Upper School students in distance learning through the end of the school year. The spring athletic season has been suspended indefinitely. Our administration continues to operate remotely. We're only an email away!

Our Summer Programs will be offering virtual programming for at least weeks 1-3, June 15 through July 3. Information will continue to be updated at www.cfsnc.org/summer.

To view a collection of resources and the latest updates from Carolina Friends School related to the coronavirus and COVID-19, visit www.cfsnc.org/coronavirus.